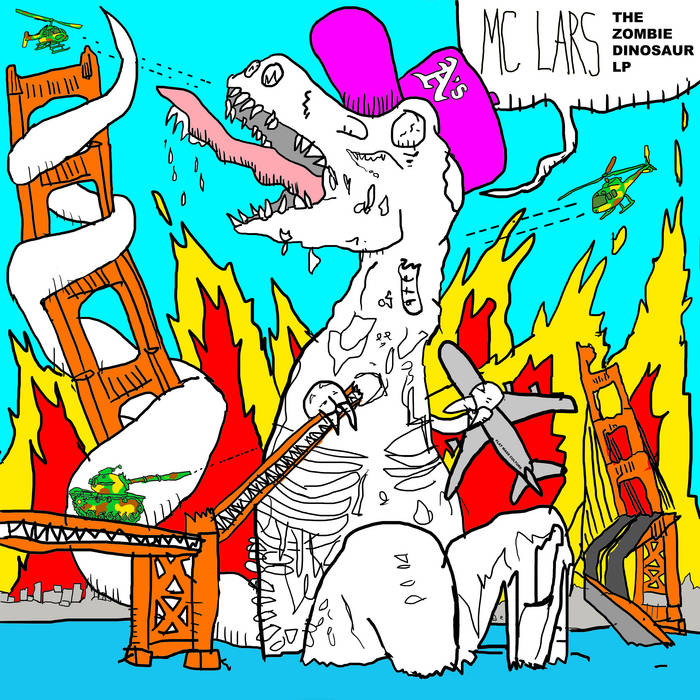 music by MC Lars, Jim Greer and Damondrick “D.J.” Jack
lyrics by MC Lars (shout out to Hot Karl for the TMNT lyric!)

The zombie t-rex is back,
undead swag with that old-school rap
‘Cause it’s Kurtis Blow with that Nerdist flow,
getting pterodactyl fly on the track
Four records deep, five EPs,
one mixtape, guess you can’t kill me?
Poison when I spit it, Komodo dragon (yeah),
nerdcore royalty, kimono draggin’
Sesquipedalian loquaciousness,
no rapper ever born dared to rhyme like this
MC Lars with the rhythmic alacrity,
oratory skills ‘causing mad catastrophe
‘Cause my whole crew’s sick, like Kubrick,
got your eyes wide shut for this apocalypse
Let’s face it, I’m an awesome rapper, post-punk laptop velociraptor
No, I won’t dumb it down for the mainstream fan,
‘cause the mainstream fan has lame taste man (yeah I said it)
And I’m flying over hurtles,
keep it underground like Teenage Mutant Ninja Turtles
See, a funny thing happened on my way to the stage,
waylaid by a stegosaurs snacking on my leg
When I made my escape it was way too late,
got that T-virus strain all up in my veins
Bringing pain like the Necronomicon,
iguanodon loose up at Comic-Con
Tearing up your lawn like a mochlodon,
take away your girl like I was Donkey Kong
Jurassic park this van in your city every time I rock a show,
‘cause the fans all bounce when I light up the room with my pyroclastic flow, yo!

Skip Turner: “Our top story tonight, a herd of zombie dinosaurs is lose in San Francisco, causing my damage and destruction than the city has ever seen. We go now live to the Golden Gate Bridge, where a zombie tyrannosaurs rex is currently ripping apart the suspension cables and pushing cars into the bay.”


Skip Turner (continued): “Coming up after the break, San Francisco has already seen it’s local coffee markets impacted by these zombie dinosaurs. What these developments mean for your organic arabica. And then, enterprising young people are bringing gentrification to dinosaur caves and dens. We find the city’s best apocalyptic food trucks… and finally an Oxford study finds that white kids are still not hyphy. What can you do to help? We’ll cover it, after the break.”