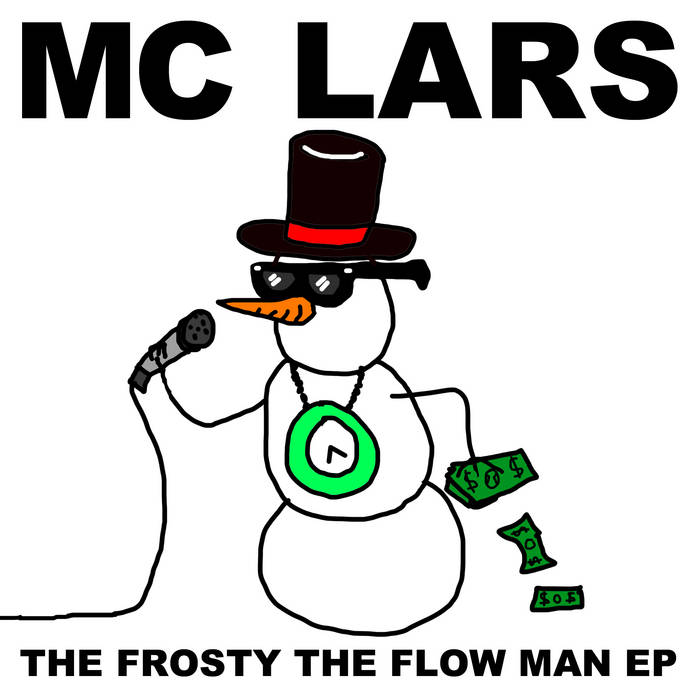 Welcome to the second MC Lars Christmas EP. We begin this EP with the story of a snowman. Now you've all heard of Frosty, but this isn't the typical Frosty the Snowman story. Gather around children, you might learn something.

Here's the story of a dude, his name was Frosty
Who made more money than the Insane Clown Posse
And he lived that rapper life, hella gold chains and ice
And he liked to show it off 'cause he was flossy
Made his living as the first rapping snowman
He was known around the world as quite a showman
But he started underground, working on a brand new sound
And his people called him Frosty the Flow Man
Starting winnin' local battles as an MC
But the problem was that Frosty wasn't friendly
And he stepped on people's toes, now everybody knows
That bad karma's riding shotgun in his Bentley
See he never paid his agent her commission
And cold-hearted that was Frosty's disposition
'Cause he spent it all on blow, put that snow right up in his nose
And he started making hella bad decisions

Frosty the Flow Man,
Signed a major label deal
But the car he bought was just much too hot
And he could not keep it real

Frosty the Flow Man,
Sold his publishing they say
But his debts accrued, he annoyed his crew
And the bank took his house away

Yo Frosty, Frosty, please don't be so bossy,
Yelling at the engineer, like "Go get me coffee!"
Worse than Gaddafi, business skills on sloppy
Screaming at his publicist, "I told you make them glossy!"
Photo shoots, videos, YouTube and Vimeo
Caviar, escargot, it was quite a pitty yo,
It was all recoupable, something Frosty didn't know
Ego it began to grow, album sales began to slow
Eventually he lost all perspective
And the heat went to his head as expected
Local snowman rapper on that major label ladder
And the fans, well they grew less receptive
When his second album dropped it was dubstep
But his style wasn't known in those clubs yet
And the label wasn't stable, it turned out that they weren't able
to help Frosty move those units so they dumped him

Frosty the Flow Man,
Knew his skills weren't hot that day
So he sold his car and he wrote 8 bars
On the debts he could not pay

Now Frosty the Flow Man,
Tried to make the voices stop
Every single night, smoking crack in his pipe
Getting drunk by the liquor shop

from The Frosty the Flow Man EP, track released December 20, 2011